The key front line regulators are on track to bring new requirements for information transparency into force in December 2018. Other regulators have also begun to implement their own versions of the CLC’s secure badge to provide assurance to potential clients of the status of websites of regulated entities.

The CLC continues to work with government, other regulators, representative bodies and suppliers to conveyancers on the shared agenda to improve home buying.  Any impact from the recent change of Housing Minister at the Ministry of Housing, Communities and Local Government has yet to be felt. The junior minister with carriage of this strand of the ministry’s work is clearly committed to delivering change and has also agreed to deliver the keynote speech at our January conference.

Figures and opinion remain mixed, significantly influenced by continued uncertainty around the final terms on which the UK will leave the European Union in March 2019. Reflecting that uncertainty, the trend towards remortgaging and away from new purchases seems to be continuing.

As we observed at the end of Q1, the trends across the UK could reflect the beginning of a slow rebalancing of the market between London and the UK, in part as a result of policy choices on stamp duty and help to buy beginning to have their desired effect.

The EY Item Club has revised downwards its outlook for growth of the UK economy in 2018 from 1.6% in its spring forecast to 1.4% now. They noted that while employment continues to rise, there has been little improvement in real pay levels and that higher utility and energy prices are likely to squeeze consumer spending.

EY is also predicting growth lower than the recent trends in 2019-2021, at 1.8% which they describe as unlikely to provide a boost to corporates. That forecast is based on an assumption of a ‘stable transition’ out of the EU.

The UK Property Transaction Statistics for May 2018 showed that on a seasonally adjusted basis, the number of transactions on residential properties with a value of £40,000 or greater was 99,590. This is 0.5% lower compared to a year ago. Between April and May 2018, transactions increased by 0.8%.

UK Finance, reporting on May 2018’s lending, found a rather more encouraging picture, which it described as a ‘pre-summer boost’. They also observed that the trend of growth in remortgages continued in May.

The survey, published on 12th July, found that the availability of secured credit to households was again unchanged in Q2 and lenders expected no change in the coming three months to September.

Default rates on secured lending fell again in Q2 and were expected to remain the same in Q3.

The report published on 12th July ‘points to a broadly stable picture, at least as far as headline numbers are concerned’. RICS, in line with others, found material differences between regions, with all areas other than London, the South East and East Anglia recording house price growth, albeit generally modest. Estate agents’ stock levels remain close their historic lows.

RICS respondents also report a further growth in the time it takes to complete a property sale from initial listing. That stood at 16 weeks in Spring 2017 and is now reported to be 18 weeks.

Nationwide’s Chief Economist Robert Gardner observed: “Annual house price growth fell to its slowest pace for five years in June. However, at 2% this was only modestly below the 2.4% recorded the previous month. Indeed, annual house price growth has been confined to a fairly narrow range of c2-3% over the past 12 months, suggesting little change in the balance between demand and supply in the market over that period. There are few signs of an imminent change. Surveyors continue to report subdued levels of new buyer enquiries, while the supply of properties on the market remains more of a trickle than a torrent.”

This index looks at asking prices and found what it describes as the usual summer lull in July. The average fall in asking prices this month was 0.1% or £248. The greatest price falls were at the lower end of the market, with houses with two bedrooms or fewer falling in price by 3.5%.

Rightmove also found that the percentage of sellers reducing their initial asking price is at its highest since 2011, indicating perhaps over-optimism on the part of sellers or their agents.

This month’s report marked 10 years since the beginning of the BSA’s Property Tracker survey and this prompted BSA to make some interesting comparisons with a decade ago, which reflect the very different positions on interest rates and house prices in 2008 and 2018.

It is notable that lack of job security is a significantly greater concern in 2018 than it was in 2008. This is despite historically high employment rates at the moment and may reflect a wider concern about the economy as well as a shift away from full-time, permanent employment.

The survey also asked about tenure in 2008, 2018 and aspirations for the future and the findings are set out on the next page.

So it is clear that the desire to be a homeowner remains strong in the UK.  But that desire sits ill with the findings of the English Housing Survey of a consistent downward trend in owner occupation. 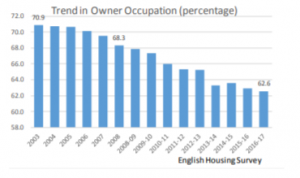