Property and Law Round Up

THE HOME BUYING AND SELLING MARKET 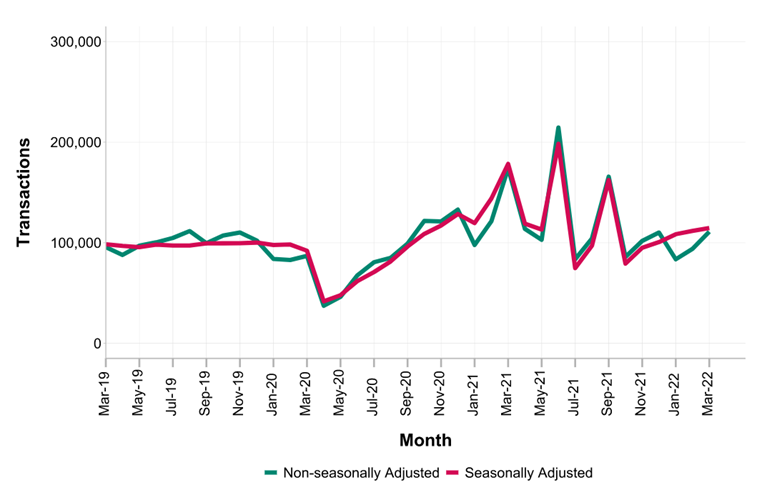 As a spokesperson for the Coventry Building Society noted, “This tax on moving home hasn’t been changed since December 2014, when an average price property in England was £203,000 and the stamp duty bill for someone already on the property ladder was £1,566.”

At a local level, house prices grew faster than earnings in 91% of local authority districts, leading to a reduction in housing affordability in these areas.

Copeland in the North West remained the most affordable local authority in England and Wales in 2021; average house prices were 2.7 times the average workplace-based annual earnings.

There are signs that house price growth is slowing. The Nationwide’s April figures show annual growth slowing modestly from 14.3% in March to 12.1% in April.

In what may be an election message that is difficult to enact, the government has announced that it is considering introducing the right to buy for housing association tenants, potentially at very significant discounts for up to 2.5 million people. The lack of replacement of sold council houses in the past contributed to housing supply shortages, so any impact of a new such a policy on long-term affordability is questionable.

The BoE raised interest rates by another 0.25 percentage points of 5th May to 1%. This will of course affect the affordability of mortgages for new buyers and for existing mortgage payers on variable rates. It is though still low by historic standards and this chart from the Bank provides some context.

The BoE’s monetary policy report for May 2022 was released on 5th May to set out he context for the interest rate rise.

The Bank begins by explaining:

‘In March, prices had risen by 7% compared to a year ago. That is well above our 2% target.

‘Higher prices for goods is one of the main reasons for this. As economies around the world opened up after Covid restrictions eased, people started to buy more goods. But the people selling these have had problems getting enough of them to sell to customers. That led to higher prices – particularly for goods imported from abroad.

‘Services inflation is picking up a little.

‘Russia’s invasion of Ukraine has led to more increases in the prices of energy and food.

‘We expect inflation to rise further to around 10% this year.

‘Prices are likely to rise faster than income for many people. That means that people will be able to buy less with their money. The UK economy has been recovering from the effects of Covid, but we expect the increased cost of living to lead to slower growth overall.’

The BoE expects the UK economy to stagnant and even to shrink in the next two years, as set out in this forecast chart.

The report identified two significant types of consumer harm in legal services. The first was structural and arose from millions of people not being able or willing to access legal advice, documents and representation when they have a legal need.

This was driving people either to do nothing or into the arms of unregulated providers.

The second arose when people do access legal services and then suffered harm because, for example, of the provider’s dishonesty, incompetence, over-charging or poor service.

The report argued that, whether harm arose from the regulated or the unregulated, neither the sector-specific remedies under the Legal Services Act 2007 nor the general consumer law were designed to offer much meaningful redress directly to the client who suffered harm – as opposed to a regulator taking action against the provider.

Professor Mayson argues for a shift in the emphasis of regulation from the avoidance of consumer harm to a state where ‘consumers can have confidence in their choice of legal advisers without burdensome enquiry about their regulatory status’.

This follows the 2020 report from Professor Mayson recommending other fundamental changes to regulation that has not attracted government interest given other very significant legislative priorities.

The CLC has been working alongside other front-line regulators, HMT, OPBAS and OFSI to ensure that the UK’s sanctions regime is being implemented effectively. The CLC’s regulated community presents a low risk with more significant risks arising from advisory work for sanctioned individuals and businesses which is not work undertaken by CLC practices. Nevertheless, the CLC has issued new guidance to the regulated community and taken steps to monitor compliance with the regime closely.